World Cup finals have brought us one of the greatest heroes in football history and their legacy will remain eternal. However, as it often happens in football some of the biggest contributors in the games will remain in the shadows of the goal scorers and strikers, who will be the ones occupying the hearts of the fans and achieve legendary statuses. With this article I would like to take you on a journey in time through the magnifying glass of MatchEye to one of the classic and probably one of the most famous World cup finals and his “unsung” hero – the final of 1970 in Mexico and the story of Gérson de Oliveira Nunes known as Gérson.

Before the “kick off” of this exciting journey let me introduce you to our toolbox and what we are going to use in order to dissect the game from 1970 and see all aspects of Gerson’s behavior on the field. First comes our video capturing tool MatchCap, where all touches (or important events where actual touch did not occur but are crucial to the outcome of a particular situation) are recorded and split into events, laid on the game’s timeline. Afterwards more dimensions are being added to those events, players and definitions so that every event has a meaning. The second tool we have is our data visualization tool the MatchEye, where we can visualize the data captured in MatchCap through different widgets.

Multiple facts might be mentioned for the 1970 World cup, it was the first to be played in North America, It holds one of the highest records of goals scored per game and it was the first World cup that tv viewers have witnessed in colour. Many things are well known for the final game too, first time two World Cup champions were to play against each other in a final game, Brazil became the most successful national football team acquiring three titles. And the great Pelé ended his World Cup playing career as the first and only “three times World Cup winner”.

However, even dubbed “the brain” behind Brazil’s national team by some experts back then, not many people nowadays associate the name of Gérson de Oliveira Nunes with that particular final or even know who he was. So let’s not waste a minute more, dive into the match data visualizations provided by MatchEye and observe why I think the “Canhotinha de ouro” ( Gérson’s nickname, from Portuguese: “golden left foot” ) has arguably the biggest contribution for Brazil’s win in the final game.

We will begin by looking at some raw general data from the game that ME provides, which perhaps is compelling enough as Gérson’s name has emerged as one of the best players in almost every category. And in addition we will try to identify some features of his playing style and his traits, through our analysis of his behavior & positioning on the field.

Displayed below is the basic player scouting graph, which displays for us the overall player performance stats: 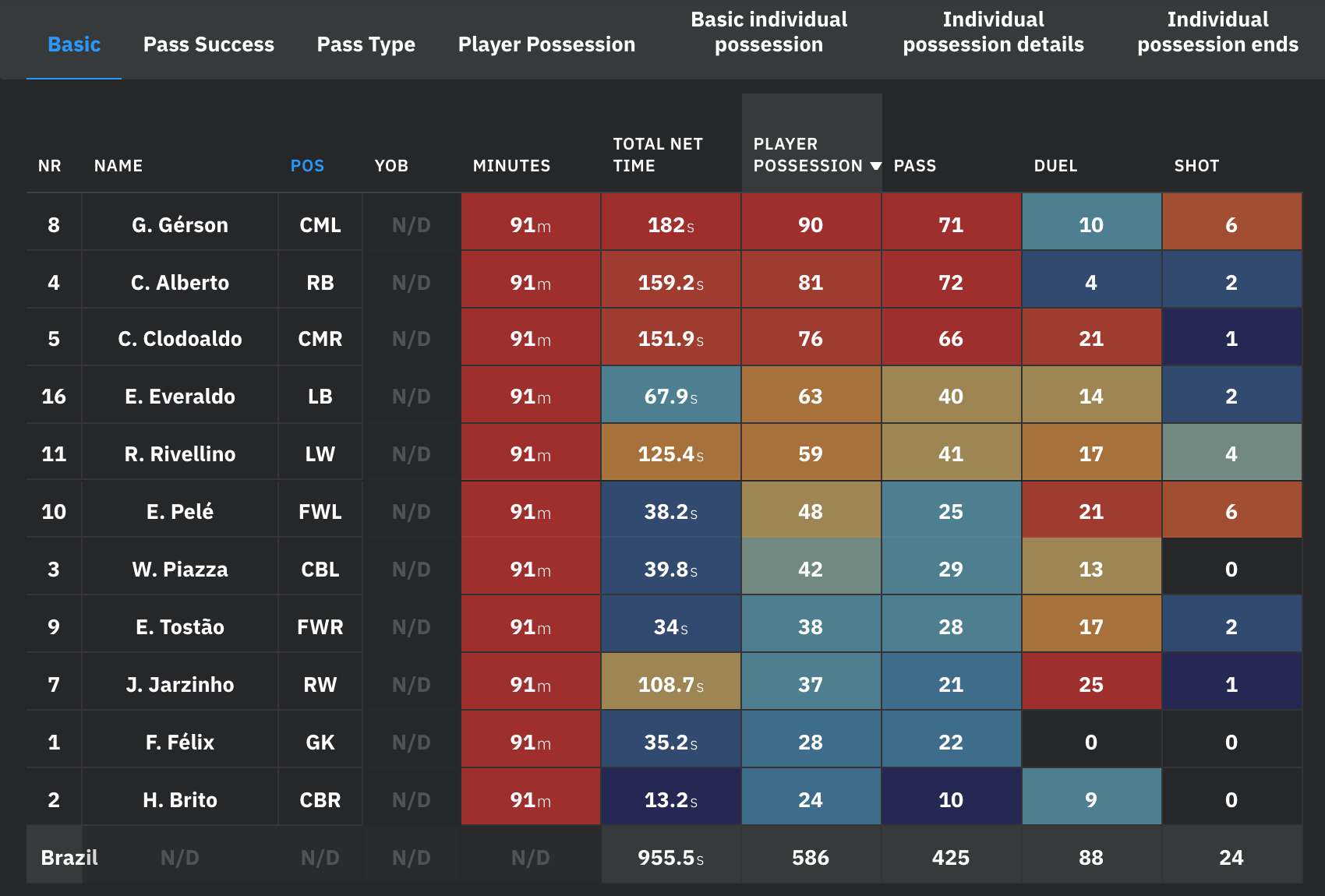 Impressive stats even only at first glance, but let’s try to dissect that even further more by looking at the Pass Success and Pass Type graphs: 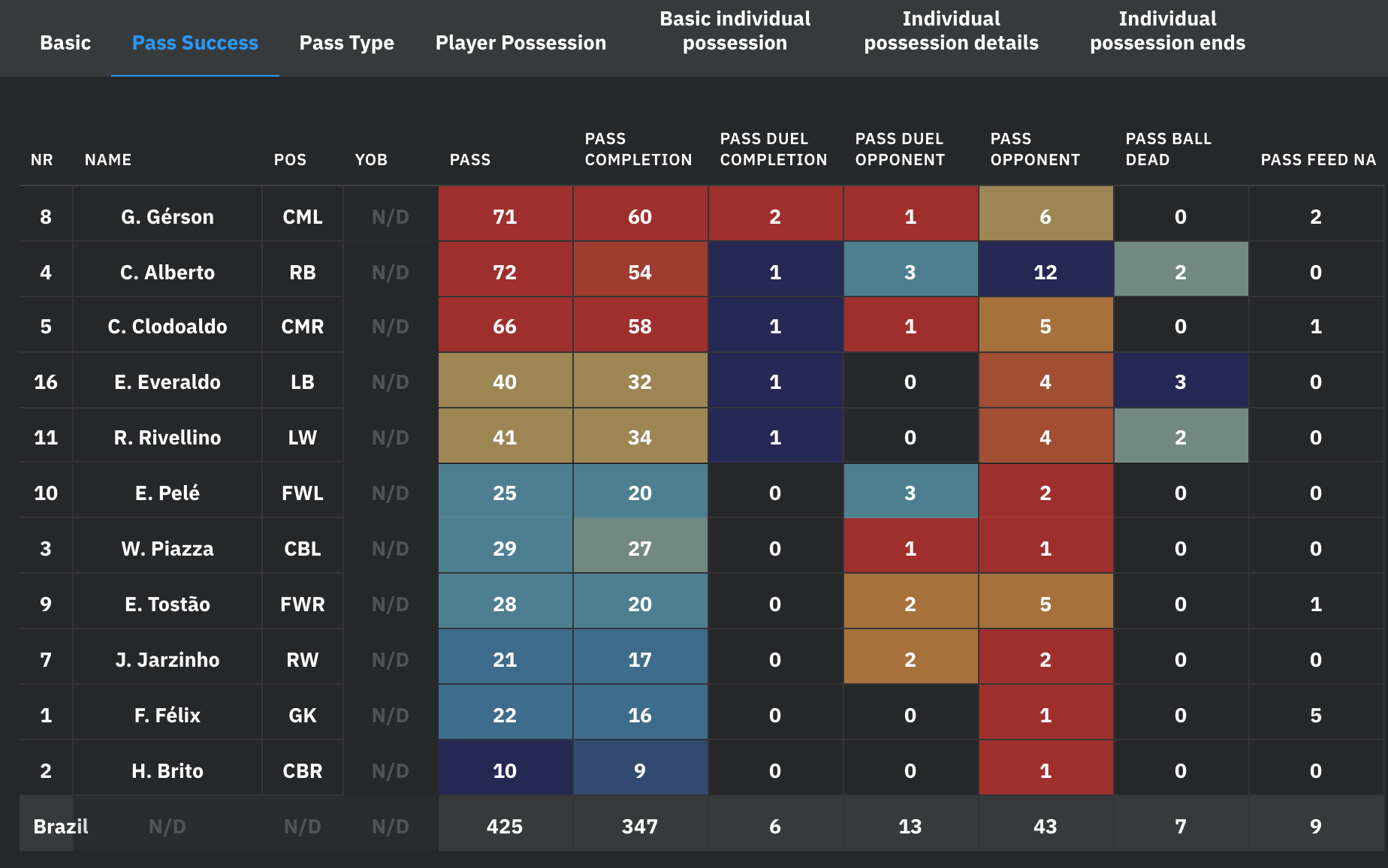 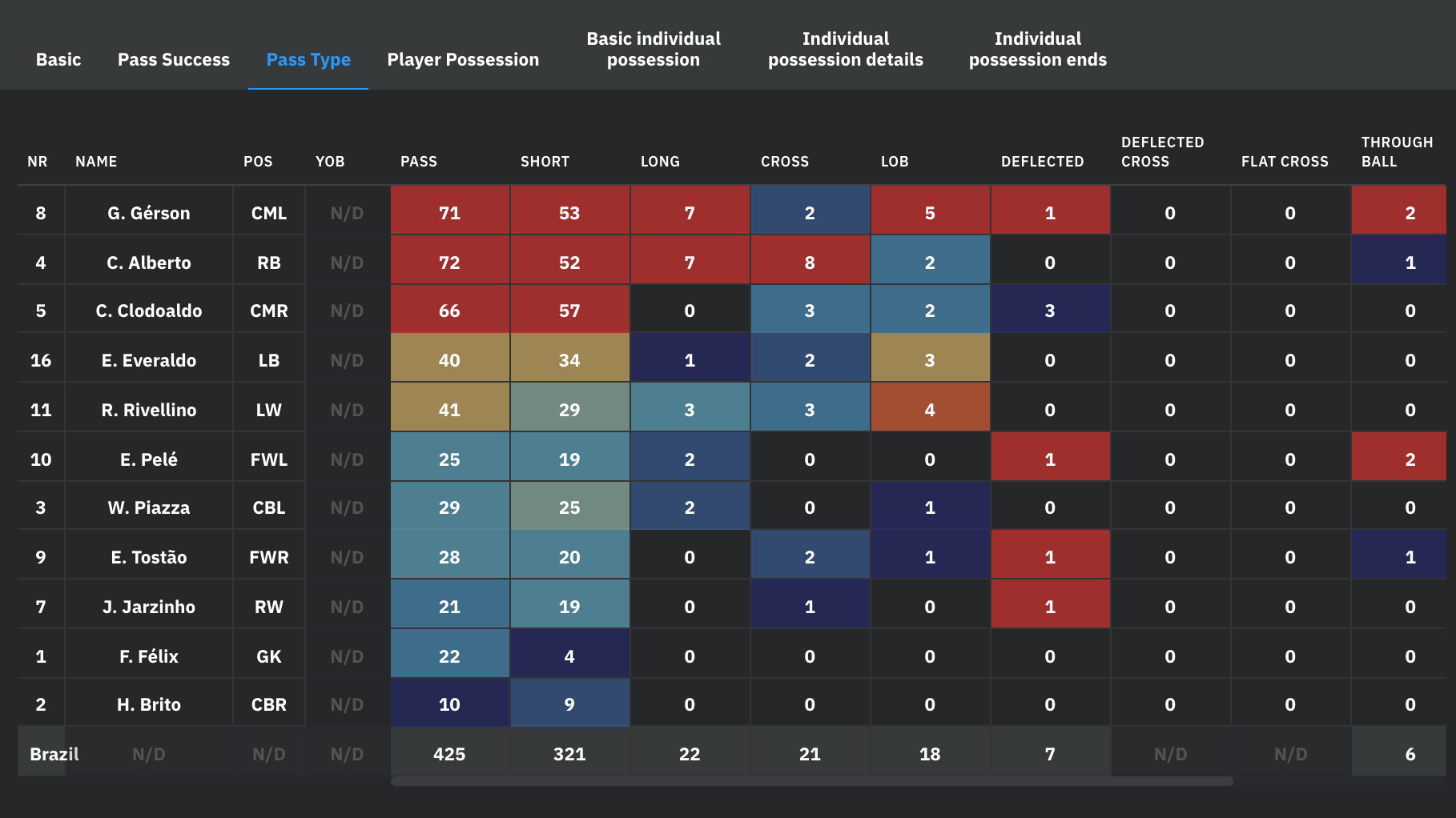 A quick look here shows that although Gerson has 1 pass less than C.Alberto, he dominates the pass completion chart with 60 in total. As a ratio, it is just a bit less than his partner in the midfield C.Clodoaldo (90% for Gerson and 91% Colorado). However, looking at the “Pass type” we see that Clodoaldo had no long passes, through balls and had executed just a few lob passes. He mainly distributed the ball short and again Gerson is the one leading the charts (long passes, through balls and lobs). The maestro also has 1 goal under his name in the general stat chart. A very imposing picture drawn by the statistics so far.

In this part we shall try to gain some impressions for how Gérson behaves around the field depending on his position. 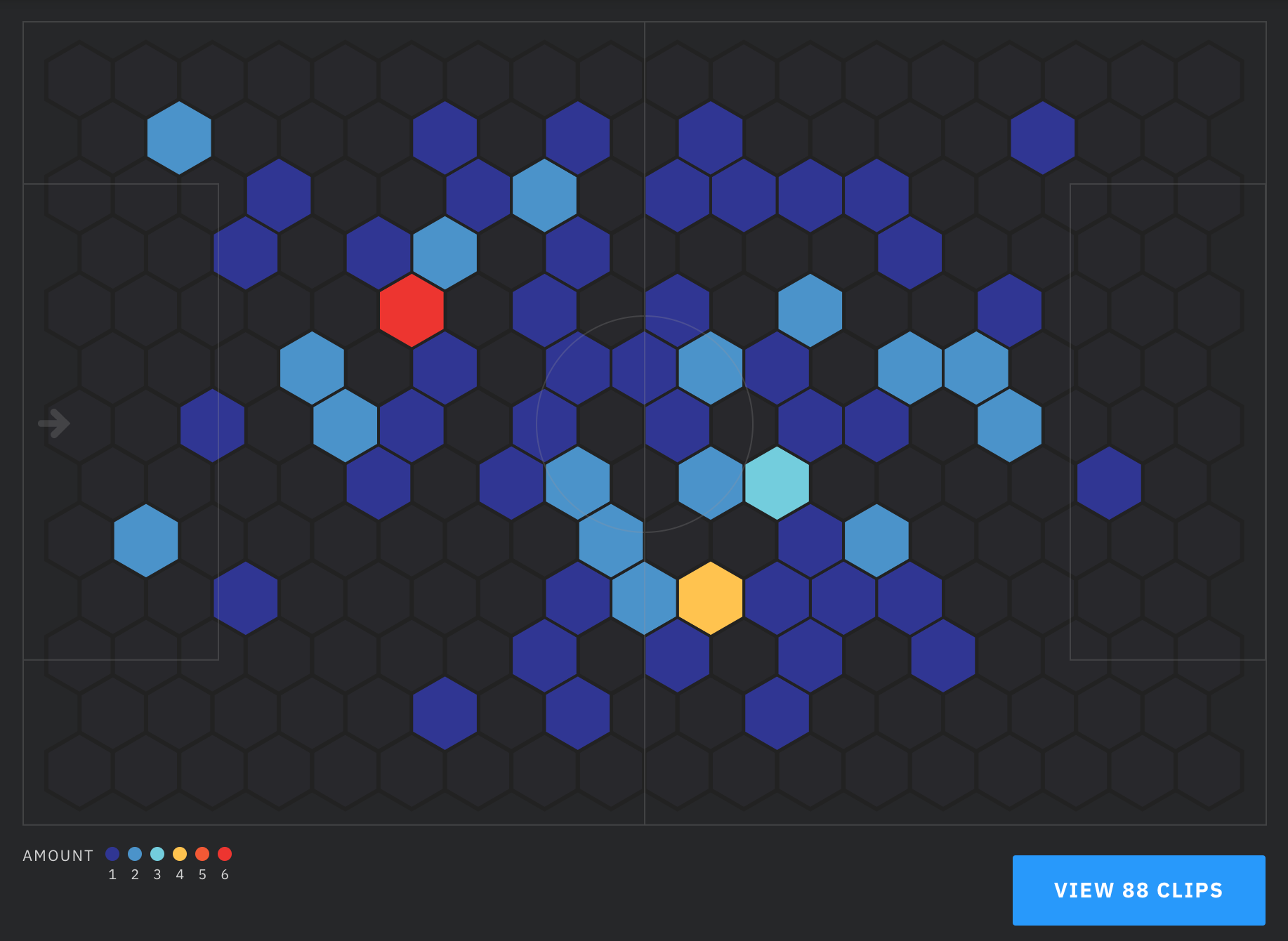 Player possession graph or places on the pitch where Gérson had touched the ball at least once. 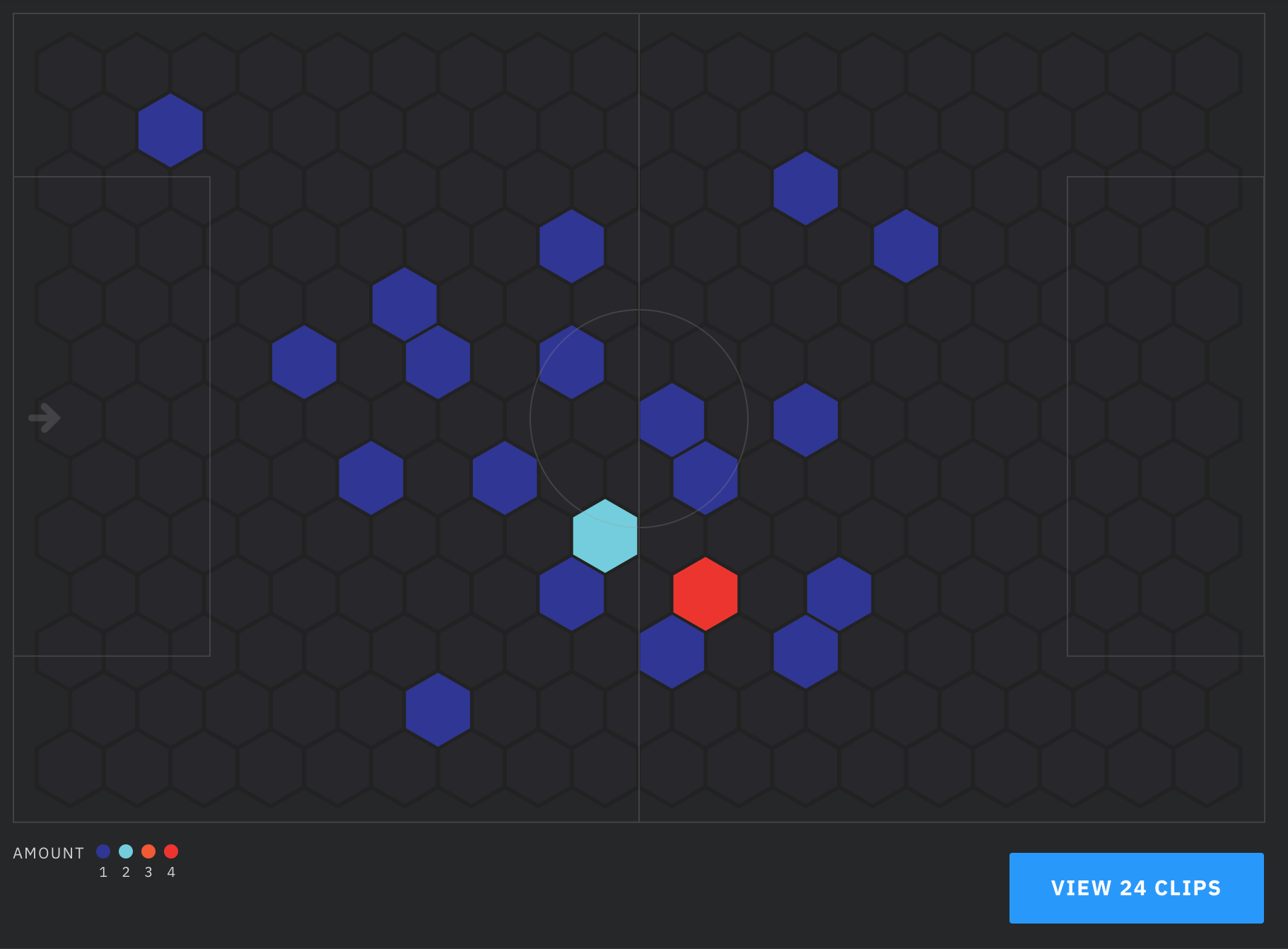 Player dribbling graph or places on the pitch where Gérson has started his dribbles (4 or more touches). 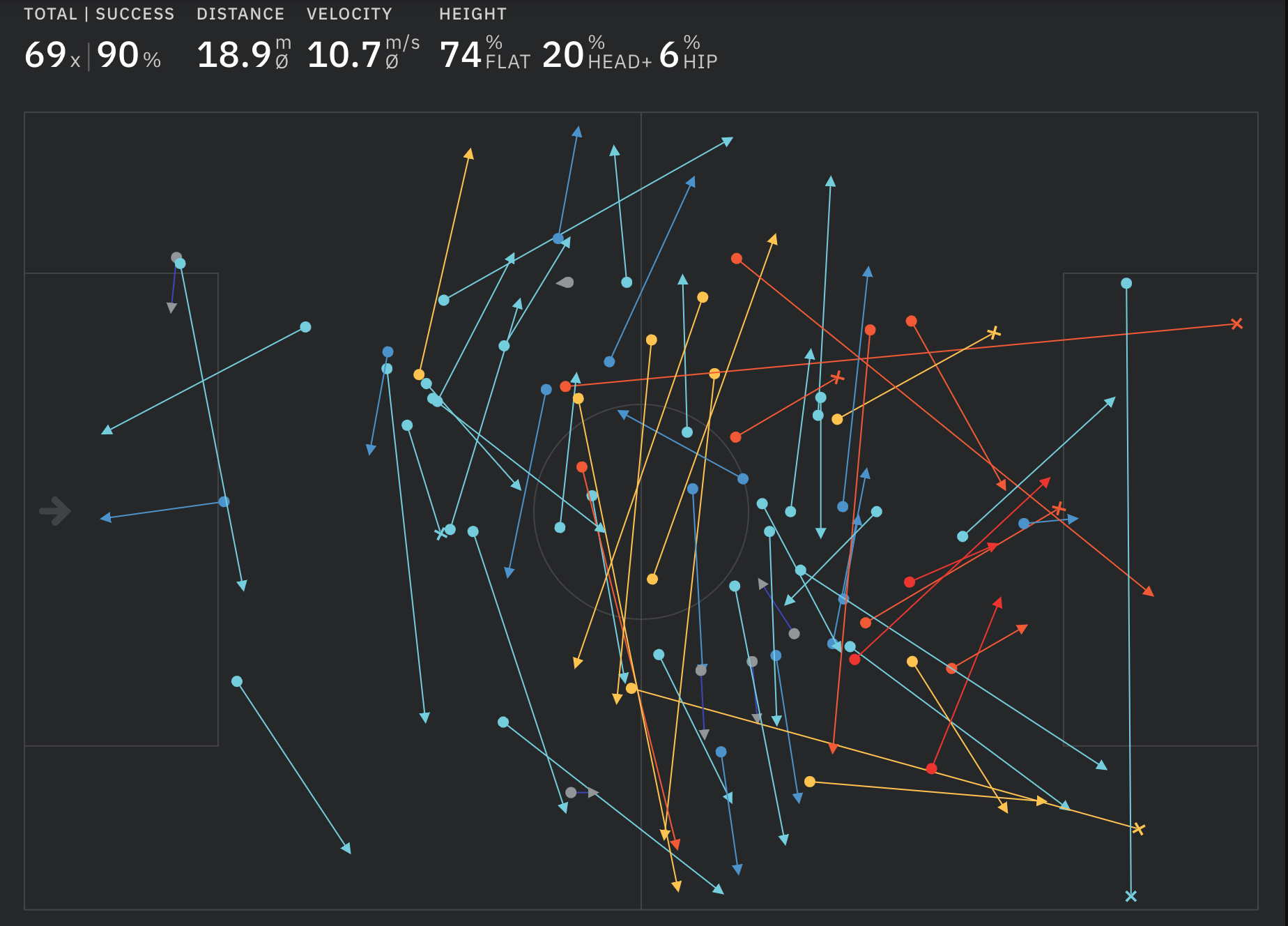 Basically in the screenshots above we can see that the virtuoso made his movement mainly through the centre of the pitch leaving the flanks and half spaces for the fast wingers (1st screenshot). Once he finds himself in the central area of the pitch as seen on the 2nd screenshot he would do more dribbles or in other words he would hold onto the ball and slow down the speed of the match. And in the 3rd screenshot we see how Gérson changes his passing style depending on the position he finds himself on the pitch (i.e. the change of color in the graph- from blue to yellow then red, indicates the change of velocities from slow, deep in his own half, to sharp in the final third of the pitch)

Now let us combine all the impressions obtained from the basic data, possession / passing graphs (and observations by watching the events’ video clips in the “Video Explorer”. Feel free to contact us to gain access to this match) by ME and try to identify some of Gérson’s traits and behavior patterns during the match.

Gérson’s activities in his own half very often would start with him coming deep to get the ball close to the penalty box sometimes even inside, then he would slowly drive the ball forward with low pace. The screenshot of the dribbling details proves the impressions from the videos, as Gérson has one of the lowest average dribbling speeds of his team.  He would mainly look to deliver a short but accurate pass to a teammate, often towards the flanks. 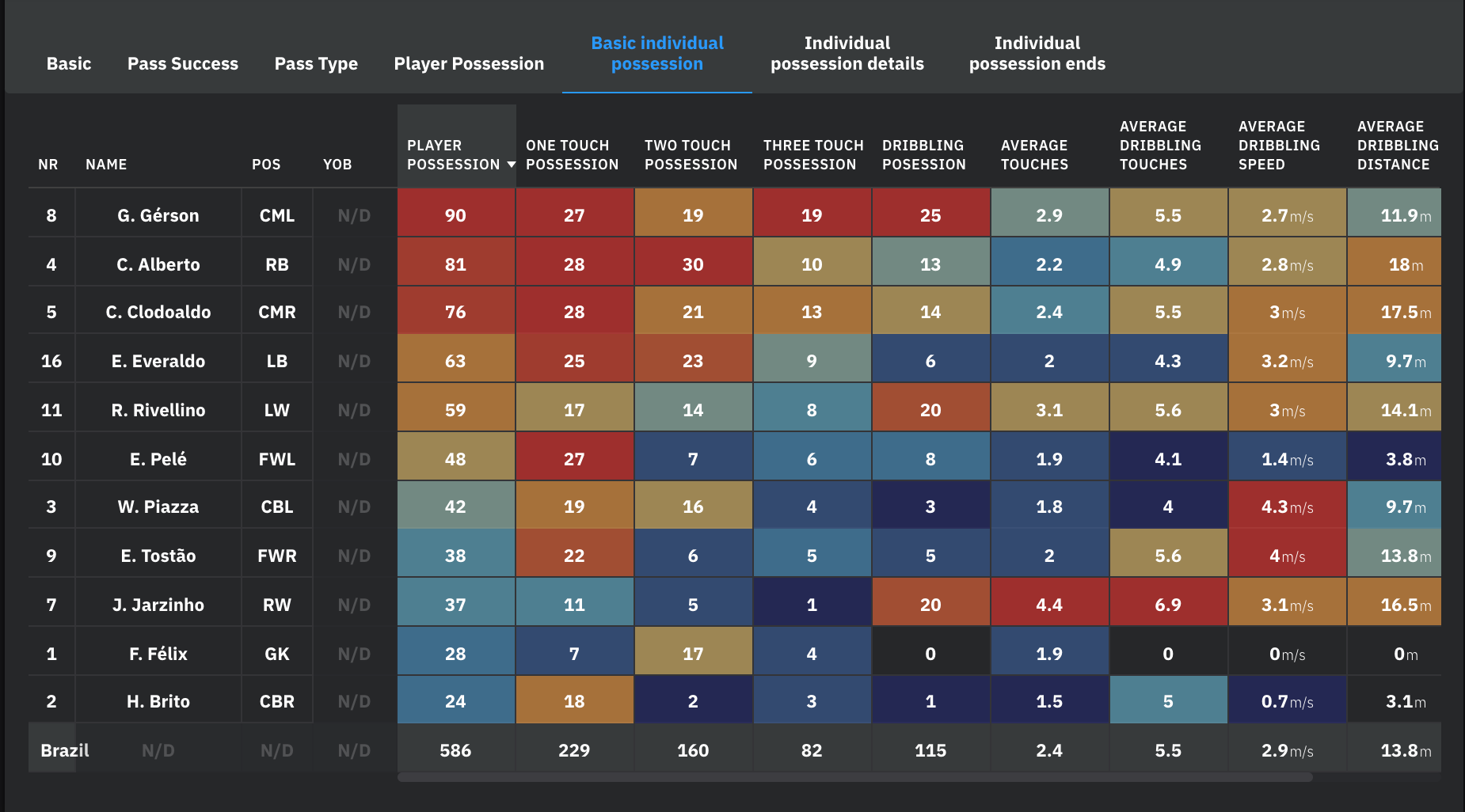 When Gérson is located towards the middle of the pitch, he really unveils his Regista abilities ( “regista” meaning “director or to direct”). He begins commencing much more dribbles and holds the ball more thus slowing his and the game’s tempo or literally dictating it. He waits for his teammates to commit runs and invade space forward and then his great vision and flair allows him to start spreading short or long balls with dizzying accuracy. Many of those passes were towards C. Alberto, which the right back turned into many dangerous crosses. One of them ended in Pele, which he turned into an assist for Jairzinho’s goal.

And once the maestro gets to the third half or close to the opponents penalty box, a remarkable transformation occurs. From an accomplished holding midfielder (“Regista”) Gerson turns into a flamboyant “attacking midfielder”: taking on defenders, drifting inside the box or moving into channels and shooting towards goal. In one of his typical runs forward he steals the ball from a defender, elegantly dribbles past another and with a precise shot outside the box, scores maybe the most exciting goal in the game. Furthermore his passing becomes faster, more direct and towards the middle (but remains with the same superb accuracy). This way he sharpens the whole flow of the attack in the offensive third, the ball gets faster to the forwards and they have a chance to take on the defenders while they are still unorganized. Such a general transformation in playing style requires not only excellent technique and ability but also very high confidence, self belief and driven personality. Therefore it is very rarely witnessed even in present days, where football has evolved by far.

What adds even more merit to his performance is all the excellent movement, passing and shooting, he accomplished against undisputedly the best defense in the world at that time. The Italian “Catenaccio” was at its peak and the defense was one of their biggest strengths.

At the end, the question that we started our journey with: “Was Gerson, a main reason behind Brazil’s win that night?”, has only one answer and it is without doubt: “Yes, by all means”!

Not only because of the general data statements, where he appears as the most successful and versatile passer, the best dribbler, the person who spent most time on the ball and one of the best shooters towards goal… Or the beautiful and bizarre transformations he achieved on the field and his capability to orchestrate the game at will. But because of the entire image he drew with his performance that night in Mexico City. An image of a man with an otherworldly ability and relentless determination. A man, who turned into a beacon for his teammates and led them by example. A man, whose only goal was to lift victoriously the most desired trophy in the game of football.